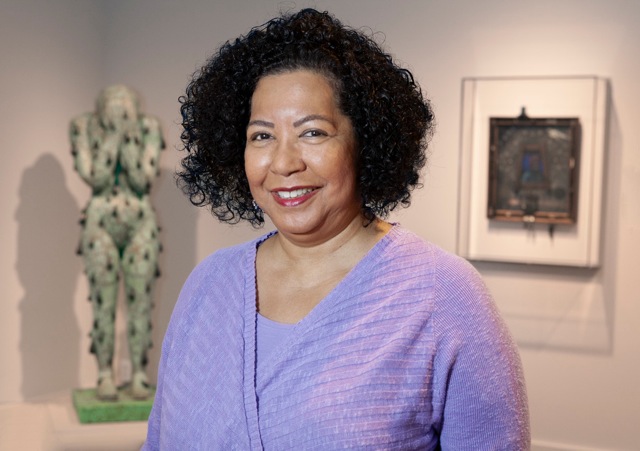 Valerie J. Mercer is the first curator of African American art and Head of the General Motors Center for African American Art at The Detroit Institute of Arts. Prior to her move to Detroit, Mercer was an adjunct professor for two years at The City College of New York and visiting lecturer at The Rhode Island School of Design, teaching courses on modern and contemporary art.*

Mercer developed her curatorial experience working at The Studio Museum in Harlem for seven years, leaving there in 1999 as senior curator. Among the numerous exhibitions she curated at The Studio Museum were the nationally toured Explorations in the City of Light: African-American Artists in Paris, 1945-1965 and

The Studio Museum in Harlem: 25 Years of African-American Art; and a solo exhibition on the paintings and works on paper of renowned abstract artist William T. Williams. She wrote essays for the catalogs that accompanied these exhibitions and has written articles for The New York Times.*

In 2003, Mercer organized an in-house survey of the museum’s African-American collection that blossomed during the DIA’s renovation into an entire suite of galleries devoted to African-American art. The DIA remains the only encyclopedic museum in the country with a curatorial department and galleries dedicated to black artists.**

In an interview with The Metro Times Arts & Culture editor, George Tysh, Mercer discusses her earlier plans for the museum.

“There’s a great deal of knowledge needed in Detroit about African-American art. Black and white people here, I feel, have very limited knowledge of African-American art. I’m working on an acquisition plan, where you analyze your own collection and point out the strengths and weaknesses, but particularly you emphasize what you need and all the areas that are missing. There’s so much that’s missing, understandably, since this is still a relatively young initiative here at the museum.”***

“And another thing that I want to do here is bring in artists of Afro-Cuban and Puerto Rican descent, because the world is getting smaller. It would enrich our knowledge of the African diaspora. For African-Americans, it’s really important to know just how broad that African strain is, that it’s not just us.”***

Recently Valerie Mercer curated an exhibition titled, Art of Rebellion: Black Art of the Civil Rights Movement which explored powerful artworks by African American artists who formed collectives during the Civil Rights Movement of the 1960s and 1970s. These collectives, made up of artists working together in distinct groups, created art specifically for African American audiences that asserted black identity and racial justice. The exhibition included 34 paintings, sculptures, installations and photographs produced by artists working both collectively and independently to address social and political issues surrounding the Civil Rights Movement and today.  Situated within the story of these collectives is the Detroit rebellion of 1967.****

Valerie Mercer’s curatorial work shines a light on Detroit’s black art history for the world to see and experience.

A Publication of the College Art Association http://www.caareviews.org/reviews/3359#.XGOtglxKiV8

Fact sheet for Art of Rebellion: Black Art of the Civil Rights Movement:

There was an error retrieving images from Instagram. An attempt will be remade in a few minutes.